The cult to Serapis is believed to have originated in Alexandria during the Macedonian Ptolemaic dynasty. Originally, one of the main functions of this divine entity may have been to federate the various communities that lived side by side in the Nile Delta and beyond. The name itself, Serapis, which is particularly consensual, emerged in Egypt during the Hellenistic period, as a result of the contraction of the names of two divinities, OSOR-HAPI or « Osiris-Apis ». In Pharaonic Egypt, Osiris had been equated to the bull-god Apis, a symbol of fertility. Serapis replaced the traditional Osiris, became the spouse of the black goddess Isis, and was revered for his healing skills. The portrayal of this life-saving god in Chiragan suggests that he is likened to Pluto (Greek Hades), ruler of the underworld, in the presence of Cerberus, a three-headed dog that guarded the gates of the underworld. Although there are no fragments to link the animal to the body of the deity with any certainty, the similarity of the smooth stone decorated with mouldings seems to suggest a connection between the two figures. To the left of the three-headed dog there is another piece that shows the dog’s tail, and a right foot shod with a strapped sandal that is identical to the left foot, also associated with this ensemble, despite the absence of any fragments to connect them in any way. The high relief of this healing god unearthed in the grounds of Villa Chiragan can be likened to an in the 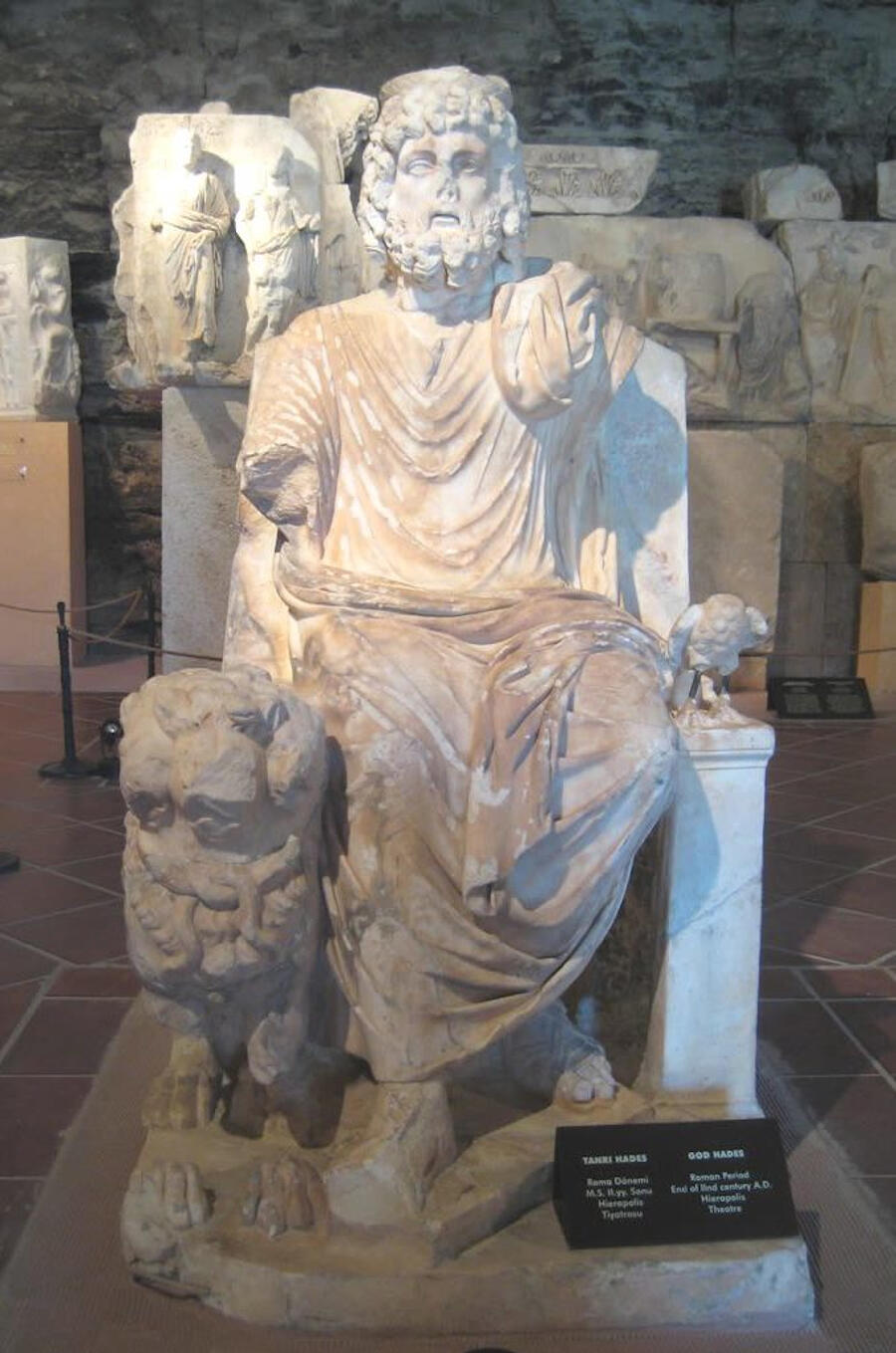 round sculpture of Hades enthroned discovered at the theatre of Hierapolis (Pamukkale, Turkey), and to Pluto, also wearing the modius headdress, found at the antique theatre of Emerita Augusta (Merida, Extremadura). Serapis is wearing a calathus (or modius in Latin), a basket used as a grain-measure, an attribute rooted in the agricultural context of the festival in honour of Osiris that concluded the fertile flooding of the Nile and the growth of wheat. This symbol is accompanied by another, placed in front of it: the hedjet, a triangular mitre surmounted by a bulb-shaped dome. The white crown or hedjet of Upper Egypt and the red crown or deshret of Lower Egypt combined to form the pschent, the double crown worn by Pharaohs.

Were the statues of Serapis, Isis and Harpocrates brought to Villa Chiragan for devotional purposes, as assumed by L. Stirling, at least during certain periods L.M. Stirling, « Shifting Use of a Genre : A Comparison of Statuary Décor in Homes and Baths of the Late Roman West, » The Afterlife of Greek and Roman Sculpture : Late Antique Responses and Practices, 2016, pp. 265–289, p. 60.? In the absence of convincing archaeological evidence, it is impossible to say. On the other hand, attributing a merely decorative function to such great effigies hardly seems plausible. A conservative view of these foreign gods, so enthusiastically adopted by the elite from a certain point in time, does seem feasible however, and a nostalgic owner who may have had ties with Egypt may well have decided to recreate an Isiac display within the villa. Although these foreign gods had been the object of much, and sometimes violent, opposition by the Roman aristocracy (it is worth remembering the middle of the first century BC in Rome, when the Senate ordered the destruction of places of Isiac worship built from private funds) D. Cassius, Histoire romaine, 2nd century, 40, 47. the gods of the Delta returned to favour under the Flavian emperors at the end of the first century AD.

It was then, during the reign of Commodus, the last emperor of the Antonine dynasty, that Isis and Serapis were honoured, namely by minting a series of coins. Following in the footsteps of the emperors of the Severan dynasty, it was the Tetrarchs at the end of the 3rd century, including the two augusti, Diocletian and Maximian Hercules, who were to elevate the gods of salvation and protection to a lofty position in the pantheon.

The great high relief of Serapis discovered at the Chiragan site could well have been inspired by a model that was particularly well known in Antiquity, and which is reflected in the coins of Alexandria minted during the reigns of Trajan and Hadrian. The god, standing, holds a sceptre in his left hand and extends his right arm over 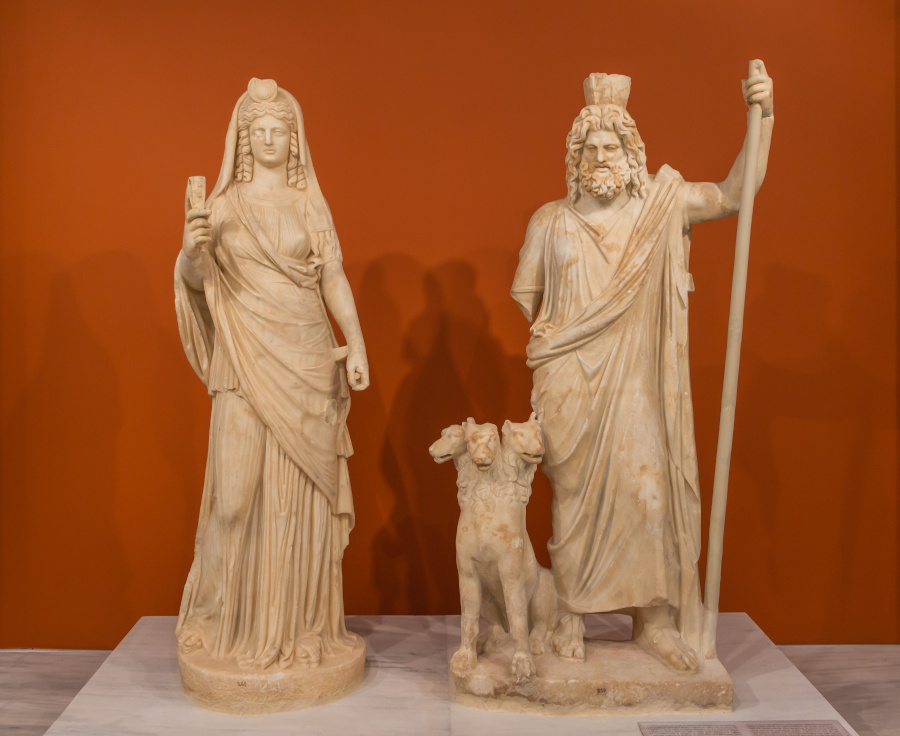 Cerberus’ head M. Amandry, A. Burnett, Roman Provincial Coinage , Vol. III : Nerva, Trajan and Hadrian (AD 96-138), London-Paris, 2015, III, 4187, 4533, 6032.. It is to this model that the work, now in the Musée Saint-Raymond, should be associated, and not to the type of statuary created by the Eastern Greek sculptor Bryaxis, a flamboyant creation designed using luxurious materials. The latter is thought to have represented Hades, whose identity was changed at least 50 years after the god’s creation, in favour of the new god of the Ptolemaic dynasty, whose great temple had recently been built in Alexandria.

The gods of the Delta were imported from Sicily and the island of Delos, where the religion of Serapis had become firmly established. Egyptian traders and slaves were instrumental in the spread of these cults on Italian soil. During the Empire, Serapis calathophoros (or basket bearer), healer and escort to the deceased, retained his role as the minor god alongside the more powerful Isis, the black goddess who promised eternal life to those who followed her. In Gallia Narbonensis, as highlighted by L. Bricault, the representations of Serapis abound in the Rhone valley, the foothills of the Alps, the Massif Central, and major urban centres from Marseilles to Vienna, including Nîmes, Arles and Glanum L. Bricault, Atlas de la diffusion des cultes isiaques : IVe s. av. J.-C.-IVe s. ap. J.-C. (Mémoires de l’Académie des inscriptions et belles-lettres), Paris, 2001.. This god’s presence is less widespread in the upper Garonne valley and in Toulouse, where fine examples can nevertheless be seen: bronze busts in Montmaurin, and marble busts in Saint-Michel-du-Touch (no longer extant).

Capus P., "Serapis-Pluton", in The sculptures of the roman villa of Chiragan, Toulouse, 2019, online <https://villachiragan.saintraymond.toulouse.fr/en/ark:/87276/a_ra_29>.