The large sculpture of Athena discovered at Villa Chiragan is a reproduction of one of the works which, according to written sources, were created, by Myron of Eleutherae, an artist who was active in 450/440 BC. The goddess, originally made of bronze, was accompanied by another sculpture made from the same alloy, representing a silenus named Marsyas, a member of the procession of Dionysus J. Boardman, Greek Sculpture. The Classical Period : A Handbook, London, 1985, fig. 61-64 ; K. Junker, « Die Athena-Marsyas-Gruppe des Myron auf der Akropolis von Athen, » Jahrbuch des deutschen archäologischen Instituts, 117, 2002, pp. 127–183, en partic. p. 130-131, Pl. 1-6 et p. 138-139, Pl. 11-14.. Part human and part animal, this hirsute being, who originated in Phrygia, a region located in the heart of Asia Minor, has been widely represented in Greek art. The pair he formed with Athena was created for the Acropolis, the most important religious site in Athens. The staging of these two mythological beings may have originated in the performance of a lyrical theatrical work dedicated to Dionysus, a dithyramb written by a poet of the 5th century BC known as Melanippides. Six centuries after its creation, Pausanias, a Greek writer of the 2nd century, described this bronze pair, the fame of which was such that many variants were designed for the most beautiful estates of the Empire in his time Pausanias, Périégèse, 2nd century, I, 24, 1..

This marble image reproduced by workshops specialised in making copies thus more or less accurately reflected the moment in history to which Myron’s bronze originally referred. The episode chosen by the Greek sculptor was that of the rejection of the aulos, the double flute, by the wise and radiant Athena, who had just realised how disfigured she looked when she blew into this instrument Plutarque, « De cohibenda ira, » \OEuvres Morales, 1st – 2nd century, 6, 456 b.. Marsyas then appears and goes to pick up the instrument, but checks himself because of the goddess’s injunction forbidding anyone to use it. Satyrs are known to be music lovers, and Marsyas himself is intimately associated with wind instruments such as the aulos and syrinx (pan flute). The numerous musical exercises, and the efforts the creature made to tame the instrument forsaken by the goddess subsequently resulted in Dionysus’s companion provoking Apollo, the god of music par excellence, and intimately associated with another family of instruments, the strings. Marsyas ended up paying a high price; at the end of a competition (agon) that he had himself initiated, he was defeated by the Olympian deity, protector of poetry, who had him hung from a tree and flayed alive. Thus the lyre prevailed over the aulos Plutarque, « Symposiaques, » \OEuvres Morales, 1st – 2nd century, VII8. 713b..

Museo Gregoriano Profano in the Vatican. The variants from the 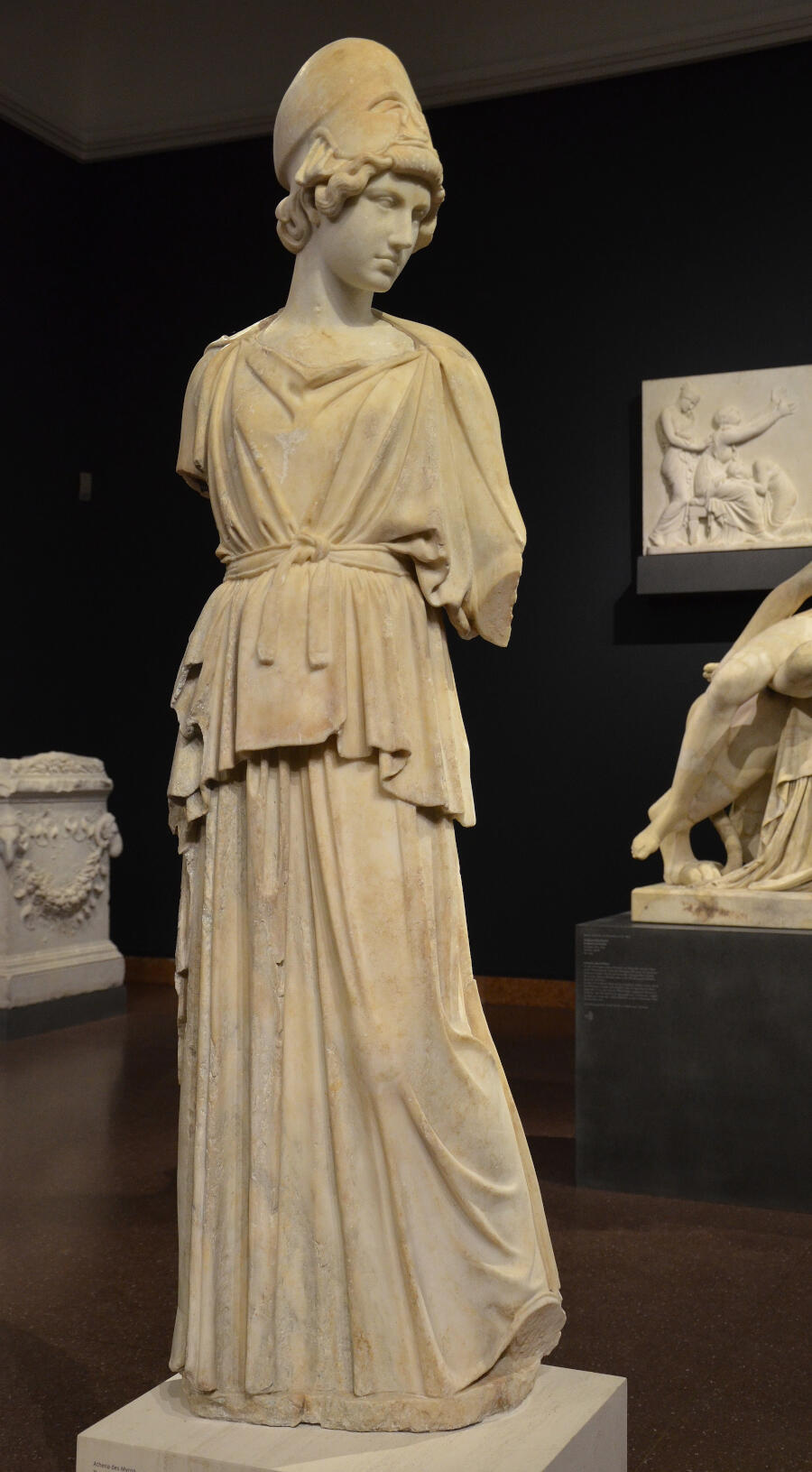 Liebieghaus in Frankfurt, as well as those from the Louvre, the Prado, or the Lancelotti collection in Rome show a classical-style sculpture, the dynamic gestures and graceful attitudes of which are reminiscent of a choreography that tends to distinguish Myron from some of his contemporaries, above all Phidias. None of the numerous fragments kept in the Musée Saint-Raymond prove, however, that Marsyas stood alongside Athena at Villa Chiragan.

When comparing the tunic (peplos) worn by the goddess with other Roman replicas, one notices a greater variety in the rendering of the folds on the specimen in Toulouse. The general structure of the work remains consistent with other known and previously mentioned works. Athena held the lance, of which only a fragment remains, against her right leg, on which she rests. Her recoil, as the shaggy Marsyas emerges, is emphasised by the slight bend and rotation of her left leg. With her left arm outstretched, the goddess orders the silenus to move away, forbidding him to touch the flutes that remained on the ground. Although this statue is now headless, the visible tension in the neck suggests that the head is turned. Finally, at the nape of the neck there are traces of a reinforcement that should not be overlooked. These marble props could well be characteristic of certain workshops that were in activity in the coastal cities of Pamphylia (Asia Minor) at that time. F. Slavazzi, Italia verius quam provincia : diffusione e funzioni delle copie di sculture greche nella Gallia Narbonensis (Aucnus), Naples, 1996, p. 140.. Could the statue unearthed in Chiragan have originated in this region, which is renowned for its abundant sculptural heritage?